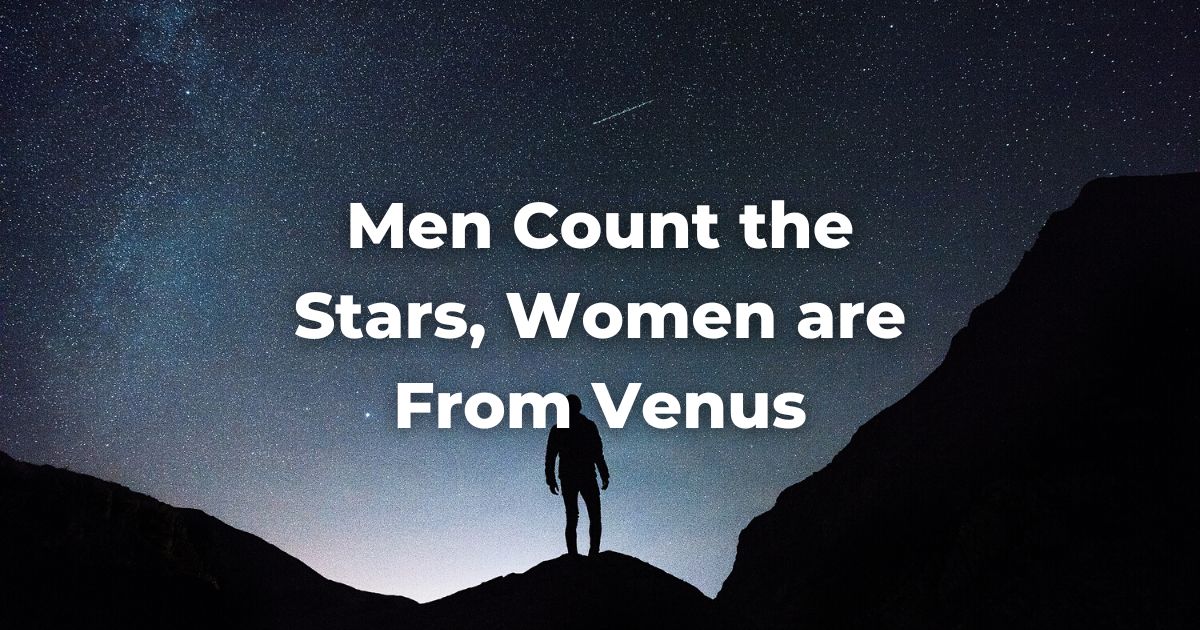 Parashat Lech Lecha depicts an acute marital crisis between Abraham and Sarah that takes place at a particularly difficult moment in their lives.

As we learn from the beginning of the parashah, Abraham and Sarah have already been uprooted twice from their home – first they left Ur Kasdim with Abraham’s father, Terach, and then they packed up again and departed from Haran in response to a divine voice promising Abraham that he would become a great nation.

Yet in spite of heeding God’s command, Abraham and Sarah have been living in Canaan for ten years, and they are still childless. The divine promise seems hollow; they are stuck, unable to move forward and realize their dreams. Then, in one dramatic and perhaps even violent altercation, all of their frustration with one another pours forth.

Why is the relationship between Abraham and Sarah so fraught, and how can their marital drama offer insight into how we can strengthen our own intimate relationships?

To begin to understand the crisis in Abraham and Sarah’s marriage, we might consider the first times they speak directly to one another in the Torah.

Direct speech is quite rare between them, and at first when they do communicate, it is only to ask favors of one another. This is evident when Abraham and Sarah arrive in Pharaoh’s court after fleeing Canaan on account of famine. Abraham is concerned that his own life is at risk – should Pharaoh wish to take Sarah as a wife, he might do away with Abraham. “I know what a beautiful woman you are.” (Genesis 12:11), Abraham tells Sarah.

He is worried about how Sarah’s beauty might affect him: “If the Egyptians see you and think, ‘She is his wife,’ they will kill me and let you live.” And so Abraham asks Sarah to lie and to subject herself to Pharaoh’s harem so as to ensure that he will emerge unscathed: “Please say that you are my sister, that it may go well with me because of you, and that I may remain alive thanks to you.”

The Torah does not document Sarah’s response, suggesting perhaps that Abraham is not really asking her, but telling her what she must do.

The first time Sarah speaks directly to Abraham, she, too, is preoccupied with her own needs, and it is at this moment that the crisis between them begins to unfold.

Sarah is distressed that she still has no children, and so she asks Abraham a favor: “Look, the Lord has kept me from bearing a child. Consort with my maid; perhaps I shall have a son through her.” (Genesis 16:2).

Sarah asks Abraham to sleep with her maidservant, Hagar, in the hope that Abraham might have a child with her, since they have been unable to conceive together. Her words are strikingly devoid of the first person plural; she never speaks to Abraham as a “we,” but rather tells him what he should do so that she can get what she wants.

We know from Abraham’s fervent pleas to God that he also wants a child. But at this moment it seems as if Sarah couldn’t care less about what he wants. She asks Abraham to sleep with Hagar not so that they will have a son, but so that she will.

And yet, as soon becomes clear, this is not really what Sarah wants, because when Abraham accedes to her request, she grows furious.

Abraham takes Hagar as his concubine and Hagar conceives, exactly as Sarah had asked. But Sarah feels that Hagar looks down on her since she is with child whereas her mistress is not. She yells out to Abraham, “My wrong is upon you!” (Genesis 16:5), and according to the midrash in Bereshit Rabbah, she scratches his face in violent anger.

Why is Sarah so angry at Abraham? What has he done wrong?

Abraham heard what she said, but he did not take the time—or perhaps he lacked the sensitivity—to understand what she meant.

The midrash (Bereshit Rabbah 45:5) relates that as soon as Hagar became pregnant, Sarah placed an evil eye on her so that she lost the baby, and had to become pregnant a second time in order to conceive Yishmael.

What Sarah really wanted was for Abraham to recognize her role in the divine promise.

The rabbis compare it to two men who go to a king to borrow seeds to plant. The first man says to the king, “Please lend me some seeds.” The king gives that man seeds, and then his friend says, “Why didn’t you ask for me as well? Why did you ask only for yourself?”

So too, Sarah wished for Abraham to recognize that she is integral to God’s blessing, which could be realized only through both of them – as indeed God will later remind Abraham.

These midrashim suggest that when Sarah tells Abraham to cohabit with Hagar, she doesn’t really mean it.

She is merely testing Abraham in the hope that he will respond, “Of course I can’t take Hagar! My destiny is through you, my beautiful wife. I don’t want a child with Hagar – I want a child with you!” Perhaps she is too embarrassed to plead with Abraham to notice her. Perhaps she has too much pride.

For whatever reason, she feels she cannot speak her heart to Abraham, and so she tests him instead. “I am so desperate for us to have a child,” she is essentially telling him, “that I could even offer you my maidservant in my stead. Can’t you see how desperate I am?”

But Abraham does not see. He hears Sarah’s words, but he is deaf to the pain and the longing that underlie them. Though he accedes to her request, he does not speak to the desires of her heart.

Sarah, in her frustration, appeals to a higher authority.

When she is unable to get Abraham to hear what she is really trying to say, she turns to God. After all, she knows Abraham is quite close with God – she knows that Abraham has asked God for a child for himself, albeit not for her as well.

Presumably she knows that Abraham gets out of bed at night—alone, without her—to look up at the heavens and muse on the divine promise. And so she denounces Abraham by invoking God: “Let the Lord adjudicate between you and me!” (Genesis 16:5).

Ultimately God does adjudicate between Abraham and Sarah by explaining to Abraham that Sarah plays a crucial part in their destiny.

The next time God reiterates the promise to Abraham, the patriarch responds, “O that Ishmael might live by your favor” (Genesis 17:18) but God insists, “But Sarah your wife shall bear you a son” (Genesis 17:9). Even God needs to tell Abraham that Hagar is irrelevant.

It is at this point that God changes both Abraham and Sarah’s names from Abram and Sarai, as they were previously known. Each member of the couple gets an extra Hey—a letter from God’s name—added to their names, and the next time Abraham receives a divine visitation, Sarah becomes pregnant at last.

Rabbi Akiva famously notes that the letters Yud and Hey, which can be joined to form God’s name, are the only difference between the Hebrew words for man (ish) and wife (isha); the letters in common spell esh, meaning fire.

He teaches that if a couple merits, then the divine presence dwells between them; if not, a fire consumes them (Sotah 17a). The relationship between Abraham and Sarah nearly leads to conflagration, but thankfully, God comes between them.

We aspire to speak the true desires of our hearts and to listen deeply to one another in the hope that our intimate relationships—far from requiring divine intercession—might be blessed, instead, with the indwelling of the divine presence. 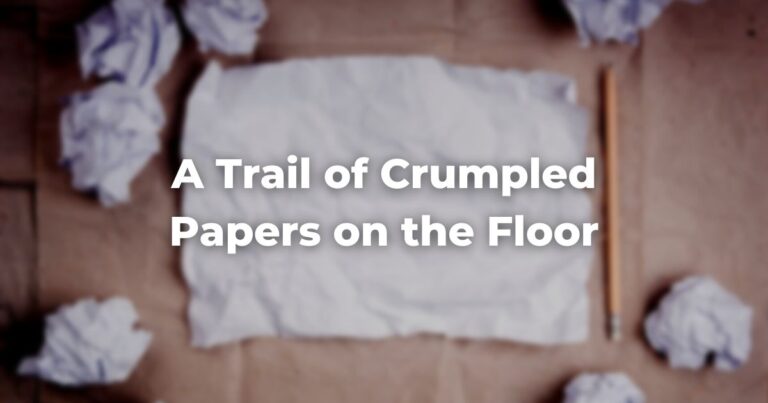 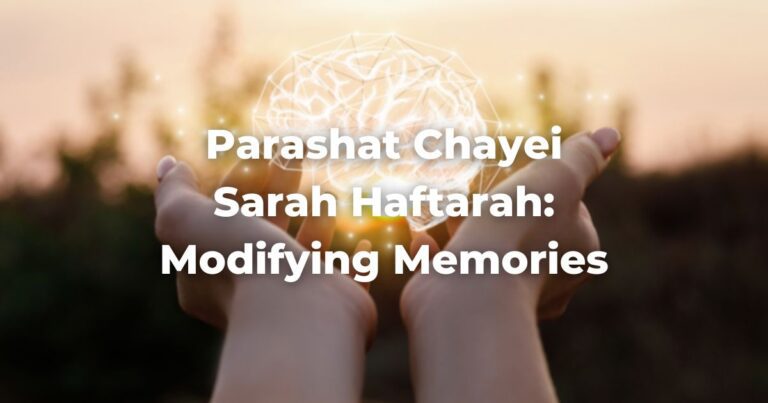 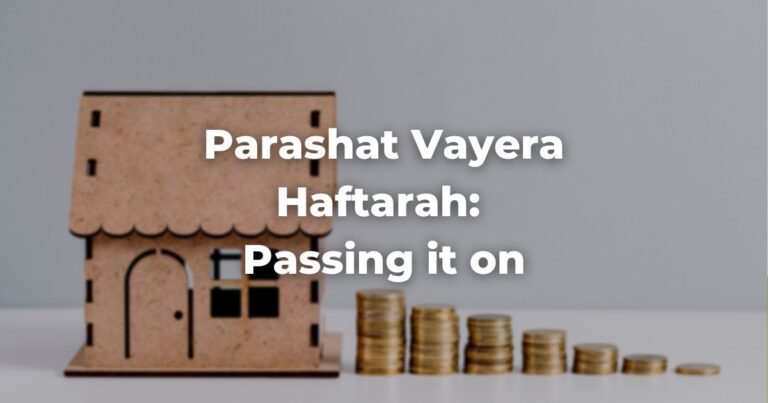